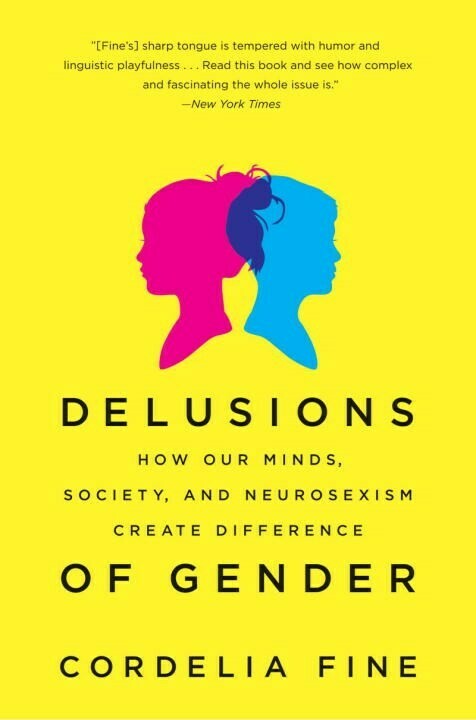 Delusions of Gender: How Our Minds, Society, and Neurosexism Create Difference

"Men and women are just different!" NOPE. Not according to science we aren't. This wickedly funny book lays out the real science of gender, clearing up myths, unraveling evidence, and correcting centuries of absurd beliefs about men being natural providers and protectors who can't read maps and women being empathetic, bad at math, and deranged by orgasms. None of that actually works that way. You will be the life of the party after reading this book (okay, we can't promise that but at least you'll probably quickly stop going to the wrong parties), chock full of the facts and framing you need to speak truth about gender.

“[Fine’s] sharp tongue is tempered with humor. . . . Read this book and see how complex and fascinating the whole issue is.”—The New York TimesIt’s the twenty-first century, and although we tried to rear unisex children—boys who play with dolls and girls who like trucks—we failed. Even though the glass ceiling is cracked, most women stay comfortably beneath it. And everywhere we hear about vitally important “hardwired” differences between male and female brains. The neuroscience that we read about in magazines, newspaper articles, books, and sometimes even scientific journals increasingly tells a tale of two brains, and the result is more often than not a validation of the status quo. Women, it seems, are just too intuitive for math; men too focused for housework.

Drawing on the latest research in neuroscience and psychology, Cordelia Fine debunks the myth of hardwired differences between men’s and women’s brains, unraveling the evidence behind such claims as men’s brains aren’t wired for empathy and women’s brains aren’t made to fix cars. She then goes one step further, offering a very different explanation of the dissimilarities between men’s and women’s behavior. Instead of a “male brain” and a “female brain,” Fine gives us a glimpse of plastic, mutable minds that are continuously influenced by cultural assumptions about gender.

Passionately argued and unfailingly astute, Delusions of Gender provides us with a much-needed corrective to the belief that men’s and women’s brains are intrinsically different—a belief that, as Fine shows with insight and humor, all too often works to the detriment of ourselves and our society.